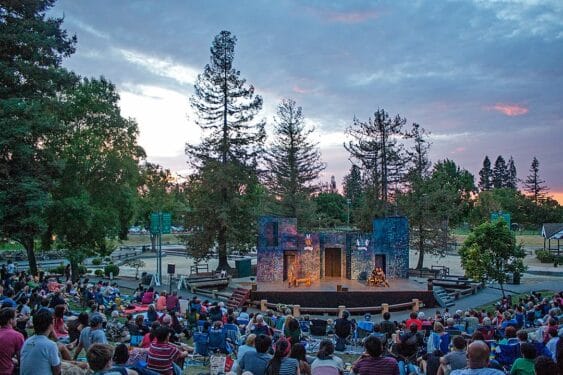 The San Francisco Shakespeare Festival is a non-profit organization that began in 1983 with Free Shakespeare in the Park’s debut production of The Tempest in Golden Gate Park.Produced every late summer in San Francisco, Cupertino and other cities, Free Shakespeare in the Park provides an opportunity for over 30,000 people to see high quality, professional theater free of charge.The 2021 production, Pericles, Prince of Tyre is a Jacobean adventure set in the classical past. The play spans many years in the life of the hero and his family. The action ricochets all over the Eastern Mediterranean moving from one ancient city to the next with travel animated by peril and punctuated by near-death experiences, tempests, and pirate kidnapping. These elements make Pericles an ideal play to perform episodically in miniseries fashion with cliffhangers bringing you back to for each new installment.