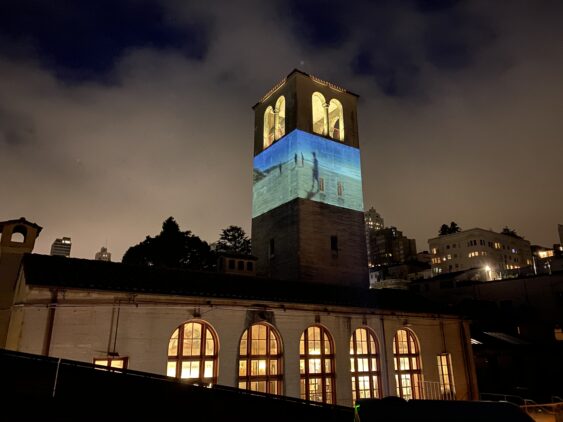 In celebration of the The San Francisco Art Institute’s (SFAI) 150th anniversary, SFAI and SF Artists Alumni (SFAA) present Three Turns, a juried, outdoor exhibition of film and video works projected onto the SFAI Tower, featuring work by 26 SFAI alumni artists in conversation with selections from the SFAI archives. This inaugural partnership exhibition between the school and the newly formed alumni association introduces a new program each night, January 22, 23, and 24, 2021, 7-8:30pm on the Tower at SFAI’s Chestnut Street campus. The projected exhibition will highlight the archive work on two sides of the tower and alumni responses simultaneously on the other two sides. The screenings will be accompanied each night with a brief program that includes participating artists and jurors. It can be viewed free of charge from adjacent streets or live online. Maps for viewing and live links are available at sfai.edu and at sfartistsalumni.org.The exhibition was conceived as a means to inspire a conversation between film and video works from the historic SFAI archives and alumni from all generations, global locations, and career levels. Archive works were selected by curators Margaret Tedesco and Leila Weefur and include: Nao Bustamante’s Untitled #1 (from the series Earth People 2507), Yin-Ju Chen’s 2006 Three Decades of Static, HD video, color, stereo, no dialogue, and Steven Arnold’s 1967 work The Liberation of Mannique Mechanique.SFAA put out an open call for alumni responses to these three short works and received over 75 submissions. Finalists were selected by a jury composed of: SFAI faculty and alumnus Christopher Coppola (BFA 1985, Director of Cinema Projects and Studies), former SFAI staff person Kathy Brew (Faculty at School of Visual Arts, guest curator at SFMOMA), and SFAI alumna Minoosh Zomorodinia (MFA 2015, Recology Artist in Residence 2020).