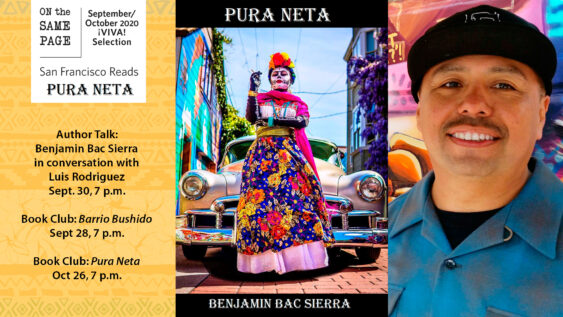 We will be discussing Barrio Bushido by Benjamin Bac Sierra, our Sept./Oct. On the Same Page author.
Latino teens Lobo, Toro, and Santo form a gang based on the philosophies of Bushido and hatch a plan to rob organized crime mobsters.
Benjamin Bac Sierra was raised by a widowed mother and the streets of San Francisco’s Mission District. After serving as a grunt in the Marine Corps, where he participated in front-line combat during the first Gulf War, Ben completed his B.A. in English at U.C. Berkeley, earned a teaching credential and a Master’s in Creative Writing from San Francisco State University and merited a Juris Doctor degree from the University of California, Hastings College of the Law. Currently, he is a professor at City College of San Francisco and a community innovator and keynote speaker throughout the Bay Area. Ben’s essays and stories have been published in newspapers and literary magazines His first novel Barrio Bushido was presented a Best of the Bay Award and an International Latino Book Award.https://bit.ly/OTSPBkClb9-28-20Disclaimer: Please double check event information with the event organizer as events can be canceled, details can change after they are added to our calendar, and errors do occur.