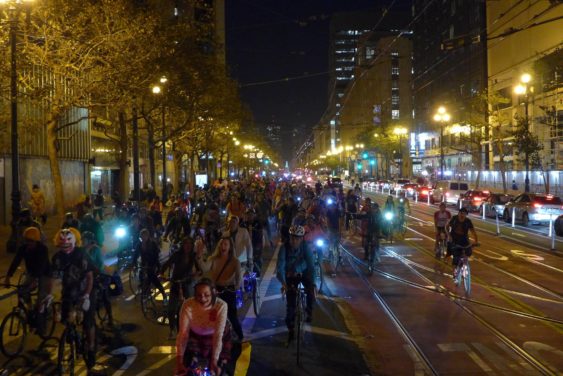 Submitted by the Event OrganizerOakland Critical Mass is a monthly group bike ride that takes place every first Friday of the month, which starts at 8 pm at the BikeLink bike lockers at 14th and Broadway, and ends at 23rd and Telegraph where Oakland Art Murmur is underway. Critical Mass is argued to be a political-protest for bikers’ rights, but it’s also a fun social ride that takes over the streets.Although generally small, the ride has had as many as 40-50 riders. Cafe sitters and other pedestrians may cheer on the ride as it passes through Broadway, Grand Ave, around Lake Merrit, Park Ave, Piedmont Ave, E. 12th St., etc. Others detest it because it blocks traffic and disrupts the evening commute. If you choose to ride, ride safely and obey the traffic laws.