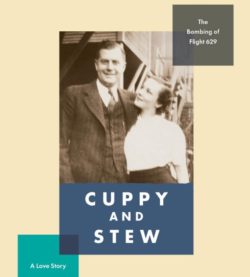 On June 3rd, join Eric Goodman for a discussion of his new novel “Cuppy and Stew.”About Cuppy and Stew:In November, 1955, a young man in Denver, Colorado, hid twenty-five sticks of dynamite and a crude timer in his mother’s suitcase. In what the FBI would term the first example of American air piracy, United Flight 629 blew up twelve minutes after taking off, killing everyone aboard. Part historical novel, part memoir, CUPPY AND STEW tells one family’s story before and after the bomb went off. Narrated by a young girl whose parents died on Flight 629, CUPPY AND STEW evokes the not-so-innocent 1950s, and the struggles of Cuppy and Stew’s daughters to survive their parents’ deaths. Prize-winning novelist Eric Goodman’s sixth novel is not only his most moving but also his most personal. His wife’s parents perished on United 629.

Green Apple Books on the Park