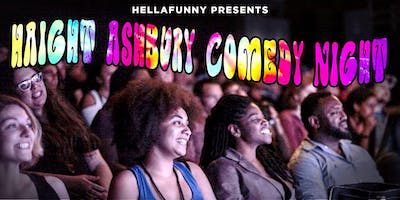 Come out to Haight Ashbury Comedy night at Milk Bar located in the heart of the historic Haight-Ashbury District to see some of SF’s best comedic talent. Comedians on the show have been featured on NBC, ABC, MTV, Comedy Central, SF Sketchfest, Comedy Day and Punchline.

Has anyone famous ever performed at a HellaFunny Show? - Yes indeed! Haight Ashbury Comedy Night has been able to attract talent of national headliners such as Hannibal Buress (Broad City), Mike E. Winfield (The Office), Jermaine Fowler (ABC's Superior Donuts), The Lucas Brothers (Netflix Special "On Drugs"), Kabir Singh (Comedy Central and Writer for "Family Guy") and many, many more.

What time should I arrive? - We suggest everyone arrive at 7:30pm.

How's parking? - Little street parking is available. However, we suggest using Lyft or another ridesharing app.

Is there a dress code? - Dress to impress! We do not have a strictly enforced dress code.

What's the refund policy? - We do have a no refund policy. All ticket purchases are final. If for some reason you are unable to attend an event you purchased a ticket to, we will be glad to honor your ticket for another HellaFunny event.

We do have a two drink minimum at this event. Thanks!