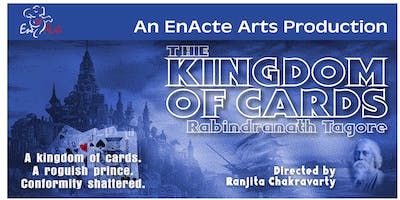 The Kingdom of Cards

The Kingdom of Cards

Adapted and Directed by Ranjita Chakravarty

The Kingdom of Cards by Rabindranath Tagore, written in 1937, parodies the fascist atmosphere that hypnotized Europe and explores human responses to radical change. Desperate for adventure, a prince decides to set out for parts unknown and ends up somewhere else: a nation filled with walking, talking cards, all dead to the world and insistent on adhering to their many rules and laws. These rules almost immediately start to fall apart under the prince’s skeptical scrutiny, and soon, the Cards are dressing like humans, dancing and singing, and even falling in love while their whole world changes around them.