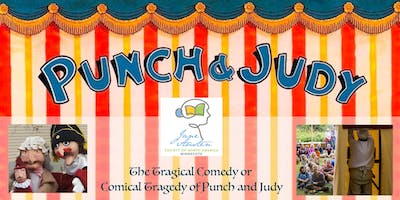 The Tragical Comedy or Comical Tragedy of Punch and Judy

The Tragical Comedy or Comical Tragedy of Punch and Judy

“In my opinion street Punch is one of those extravagant reliefs from the realities of life which would lose its hold upon the people if it were made moral and instructive. I regard it as quite harmless in its influence, and as an outrageous joke which no one in existence would think of regarding as an incentive to any kind of action or as a model for any kind of conduct.

“It is possible, I think, that one secret source of pleasure very generally derived from this performance… is the satisfaction the spectator feels in the circumstances that likenesses of men and women can be so knocked about without any pain or suffering.” -Charles Dickens

Charles Dickens penned his words about Punch decades after the zenith of Punch as a street entertainment, but his view of the show opens a window onto early modern England from which it arose. Dickens' comments came in response to a request for his support in banning such spectacles as Punch from the streets of London in the name of decency, support he refused to give. A sentiment not unlike those expressed today with regard to Punch. Yet, his approbation of Punch’s old fashioned mayhem aside, by Dickens' time, a nineteenth-century ethos had drawn Punch off the streets and re-created Punch and his wife as tame entertainers of the drawing room and most especially for children.

Wayne Krefting, Minnesota puppeteer and owner of Woodland Puppets, has recreated the Punch and Judy show of the late eighteenth century London street performer, specifically Giovanni Piccini. A two part article on the recreation of the show was published by the Journal of Early Americas in 2012. As both a professional puppeteer and also a professional interpreter of the eighteenth century North American fur trade, Krefting has a “foot in both worlds”. He has performed live and recorded/televised puppet programs in the United States, Canada, and Costa Rica. He also does history interpretation at such varied places as Grand Portage National Monument for the Department of the Interior, Madeline Island through the Wisconsin Historical Society, Forts Folle Avoine in Wisconsin, and Fort DeChartres in Illinois.

Location:
The Woman's Club of Minneapolis

Schedule:
9:30 - 10:00 am: Registration (tea & coffee will be available), also our own JASNAMN-mobile library with Regency era magazines (available for check out to members)

10:30 am to 11:30: Wayne Krefting present a short history of Punch and Judy and the creation of his show which will be followed by a performance of “The Tragical Comedy or Comical Tragedy of Punch and Judy”.
Q & A right after.

Reservations:
Your reservation must be received one week prior to the event.
(Registration will closed on Saturday September 7, 2019 at 11:30pm)

Cost of the event is $28.50 + modest processing fee* required by Eventbrite.

Members and their guests are welcome.

*While there is a modest processing fee, we've found this service to be efficient and easy to use, including an option to receive friendly reminders in advance of our gatherings.

The Woman’s Club of Minneapolis