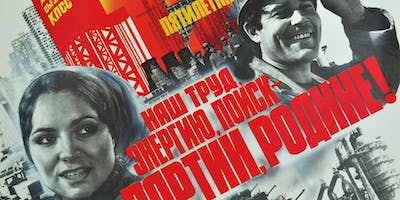 The Museum of Russian Art is pleased to invite you to celebrate the opening of three new exhibitions in our galleries:

After the Explosion: Documenting Chernobyl

Be among the first to experience these new exhibitions at The Museum of Russian Art.  Special remarks will be made by TMORA leadership as well as exhibition contributors.  Refreshments will be available for your enjoyment, and the TMORA Museum Store will be open for shopping  .  We hope you can join us!

"The 27th Congress of the Communist Party.  The 12th Five Year Plan.  Our work, energy, and ambition are devoted to the Party and Motherland!"

The exhibition Soviet Posters from TMORA Collection brings together approximately sixty works by Soviet artists from the 1940s-1980s. This first exhibition of Soviet posters housed by TMORA draws on several private donations, now in the museum’s permanent collection. We are grateful to our donors Gwenn and Eivind Djupedal, Trudy Dahl, Judy Nelson, the Truskinovsky family, and other collectors for their generous contributions that help us fulfill our mission.

Political posters deliver accessible and unambiguous messages to a diverse audience, translating complex ideologies into a concrete visual vocabulary.  Poster art became one of the primary means of state propaganda in Soviet Russia after the 1917 revolution.  As with other arts of the Soviet era, poster art was not frozen in time, reflecting the changing realities of the Soviet nation.

Early Soviet posters are remarkable for their bold aesthetics, angled viewpoints, penchant for geometric shapes, shifts in scale, abundant use of photography and ingenious placement of scripts. While retaining some of the innovations of Soviet Constructivist works, posters of the later periods employed a range of artistic means, including the state-endorsed Socialist Realist style. The exhibition intends to explore various poster art styles and the underlying visual strategies utilized by propagandists in the development of their messages.  Perestroika posters, posters with social messages and theater announcements will also be included in the display.

Mystical Imprints: Marc Chagall, Ben-Zion, and Ben Shahn presents the print work of three prominent 20th century Jewish artists born in the Russian Empire. Among these seventy pieces are etchings and lithographs from Chagall’s Bible series, Ben-Zion’s full 1980 portfolio The 36 Unknown, Shahn’s iconic The Alphabet of Creation, and more. Organized in partnership with the Hill Museum & Manuscript Library (HMML) at Saint John’s University, the exhibition draws on HMML’s remarkable collection of works on paper. Most of the works in Mystical Imprintshave never been exhibited by HMML before.

The tradition of Jewish mysticism as an inspiration for these artists is at the center of the exhibition, from Ben-Zion’s suffering prophets, to Shahn’s Kabbalah influences, to Chagall’s dreamlike images. As well as tradition, a personal sense of mysticism is evident in each artist’s work. Chagall mixed his Russian childhood, Jewish history, and his own symbology to create works of dense metaphysical imagery. Ben-Zion, to use his own word, “adored” prophets and intimately explored their lives and emotional journeys in his work. Shahn found meaning in the great work of Jewish mysticism, the Kabbalah text the Sefer ha-zohar, and in his own joy in the power of letters and words.

After the Explosion: Documenting Chernobyl

Power-generating Unit 4 of the Chernobyl Nuclear Power Plant after the explosion on April 26, 1986

The exhibition After the Explosion: Documenting Chernobyl presents a unique collection of photographs of the cleanup of the Chernobyl nuclear disaster, through the eyes of a participant. The images originate from the archive of Major General Nikolai Tarakanov who oversaw the removal of highly-radioactive elements from the site of the Chernobyl nuclear power plant explosion. Nikolai Tarakanov became a character in the recent HBO series, played by Ralph Ineson.

The No. 4 nuclear reactor at the Chernobyl Nuclear Power Plant in northwestern Ukraine exploded on April 26, 1986, initiating the worst accident in the history of nuclear power plants. Two people were killed during the explosion and twenty-eight died from exposure shortly after. Radiation levels in some areas of the reactor reached 20,000 roentgens per hour, with 500R being a lethal dose. The aftermath of the disaster was far-reaching in scope, with millions of people in several countries impacted in some way.

Taken in 1986-1988 by a member of General Tarakanov’s staff, these old photographs render the immediacy of the disaster palpable. They present soldiers cleaning the debris, the machinery used, cleaners wearing protective gear, local inhabitants outside their houses, and more.

This activity is made possible by the voters of Minnesota through a Minnesota State Arts Board Operating Support grant, thanks to a legislative appropriation from the arts and cultural heritage fund.

The Museum of Russian Art