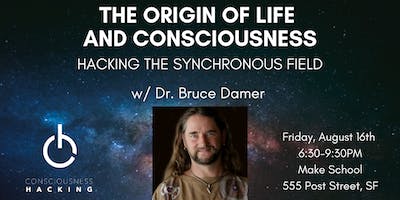 The Origin of Life and Consciousness w/ Dr. Bruce Damer

Science is on the threshold of understanding how life might have begun on the Earth four billion years ago, and how prevalent life might be in the universe. Laboratory and field experiments demonstrating how chemical cycling can form and evolve the first primitive protocells have revealed an algorithm which may be the "generative engine" still driving all living processes, and by extension, our conscious experience. The concept of "synchronicity" described by Carl Jung to provide an explanation for the paranormal, spiritual experience and the collective unconscious as well as our experiences in ordinary life, may also be explained by the operation of this engine. So in the quest to understand consciousness we may have discovered its underlying "code base".

On August 16th, 2009, come experience multi-disciplinary scientist and visionary Dr. Bruce Damer as he takes us on a sweeping tour from our earliest origins to the threshold of our conscious ability to enable hacking of the synchronous field itself, perhaps the greatest new technology for the coming Century and key to our survival.

Bruce Damer, PhD is Canadian-American multi-disciplinary scientist, designer, and author. Dr. Damer collaborates with colleagues developing and testing a new model for the origin of life on Earth and in the design of spacecraft architectures to provide a viable path for expansion of human civilization beyond the Earth. He began his career in the 1980s developing some of the earliest user interfaces for personal computers, led acommunity in the 1990s bringing the first multi-user virtual worlds to the Internet, and since 2000 supported NASA and the space industry on numerous simulations and spacecraft designs. He has spent 25 years chronicling the history of computing in his DigiBarn Computer Museum and curates archives of counterculture figures such as Dr. Timothy Leary, Terence McKenna and others. He currently serves as Principal Scientist at DigitalSpace; Associate Researcher in the Department of Biomolecular Engineering at UC Santa Cruz; Associate of the NASA Astrobiology Center; Member of the International Society for the Study of the Origin of Life, and Founding Director of the Contact Consortium. He also served as Visiting Scholar at the University of Washington and as a member of the Faculty at Charles University, Prague. He received his PhD from University College, Dublin; MSEE from the University of Southern California and BSc from the University of Victoria.  More about Dr. Bruce can be found at: www.damer.com

Do you love Consciousness Hacking? Want free entry to events? BECOME A MEMBER!

Membership gives us the ongoing support we need to keep Consciousness Hacking going strong! Plus, members get free admission to one CH event per month! Membership is just $10 per month, and If you buy a year of membership upfront, we'll give you two months (that's two events) for free!

Want to volunteer at this event? Email Josh at meadow@cohack.life for more info.

No one turned away for lack of funds.

Photographs and video containing your image may be published by Consciousness Hacking without explicit permission.

**Refunds only available via Eventbrite 7 days or more before the event! You can sell/transfer tickets to friends at face value**