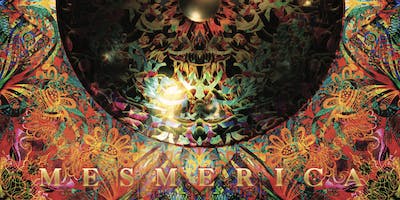 “I want 'Mesmerica' to inspire you into taking a journey with me inside the mind, to engage your senses and feelings with a miraculous alchemy of sound and light!” -- James Hood

PLEASE DIRECT ALL CUSTOMER SERVICE ENQUIRIES TO OUR MESMERICA TICKET SALES TEAM WHO ARE STANDING BY. WE AIM TO RESPOND WITHIN 5 HOURS 10AM-10PM PST.

NOTE:  "Chabot Space & Science Center is not a sponsor or beneficiary of this event. Please do not contact the museum for inquiries regarding the show or ticket sales."

Experience the magic of this 360 degree immersive art and music projection show in the Chabot Space & Science Center Planetarium.

Mesmerica is a visual music journey that brings the mesmerizing music of Grammy-nominated composer and percussionist, James Hood together with visually-hypnotic, 3D animated art curated from artists around the world, to create an immersive experience designed to transcend time, relax, soothe, and also stimulate your mind and senses...

Mesmerica has showcased in planetarium and fulldome festivals such as;  The 2018 Full Dome Festival in Espinho, Portugal, the prestigious 2018 IPS: International Planetarium Society Conferece Fulldome Festival in Toulouse, France, the Chabot Planetarium, the Vortex Dome in Los Angeles, and it has been running at the Fleet Science Center Planetarium in San Diego since October 2018.

We are so pleased to return to Oakland to showcase MESMERICA 360 at the beautiful Chabot!

James Hood is renowned as a vital and versatile musical pioneer. His lengthy and varied musical resume includes playing drums in The Pretenders, an ongoing two-decades-plus run as mastermind of the visionary ambient/electronica act Moodswings, and an expansive array of production and soundtrack projects.

In 2014, James launched the album Ceremony, an exploration of a uniquely mesmeric melodic instrument -- the PanArt Hang. The "sonic incense" of this recording spoke to fans of ambient artists such as Brian Eno, Phillip Glass and those seeking a peaceful time-slowing soundtrack. Ceremony was a resounding success, introducing tens of thousands of listeners to a compelling sonic experience, and reaching #1 on World and New Age charts in US and Canada.  James repeated that success once again with the release of Pure Ceremony in 2015.​

The show runs a little over 1 hour

SPECIAL NOTE:  Please Don’t Be Late.  The planetarium is dark and has numerous stairs, so we want you to be safely seated once the show starts. Once it has begun you won't be admitted in late for safety reasons.

The Canasta Kitchen food truck will be on site (with the exception of the May 5th date) starting at 5:30pm for your drinks and dining convenience before and after the show, but food and beverages are not allowed in the planetarium.

Free parking is available on site.   Suitable for all ages except children under 6 years-old.

Chabot Space & Science Center is a non-profit institution and community resource located on 13 trail-laced acres in Redwood Regional Park in Oakland amid the largest stand of coastal redwoods in the East Bay.  Chabot features a 241-seat full dome planetarium, interactive and hands-on exhibits, space artifacts, a giant screen theater, a Challenger Learning Center, and the only research-level telescopes regularly available to the public for weekly live viewing in the Western United States.

Chabot’s mission is to inspire and educate learners of all ages about the Universe and Planet Earth.

The Chabot Space & Science Center is located in the beautiful Redwoods Regional Park of Oakland.