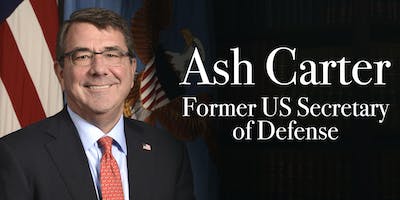 Ash Carter, Former U.S. Secretary of Defense; Director of the Belfer Center for Science and International Affairs, Harvard University’s Kennedy School; Author, Inside the Five-Sided Box: Lessons from a Lifetime of Leadership in the Pentagon
In Conversation with Dr. Gloria Duffy, President and CEO, The Commonwealth Club

The Department of Defense is the single largest institution in America, managing the most complex information network, carrying out more research and development than Google, Apple and Microsoft combined, owning and operating more real estate and spending more money than any other entity. As such, it has incredible power and immense responsibility. There is no better person to explain the inner workings of such a place than the man who ran it all.

In his new book, Inside the Five-Sided Box: Lessons from a Lifetime of Leadership in the Pentagon, former U.S. Secretary of Defense Ash Carter gives us an inside look into all that happens in one of the most secretive and secure locations in the nation—the obstacles it faces and the innovation taking place there. Unlike many of his colleagues in the Department of Defense, Carter was not always a career bureaucrat. His straightforward explanations of American foreign policy, and the ways in which the private sector and public sector can work together towards greater peace and security, reflect a refreshingly moderate perspective in such a highly-politicized era.

Join us for a conversation with America’s 25th secretary of defense about what really goes on inside that mysterious five-sided box, and how people are learning to think outside it.

All ticket sales are final and nonrefundable.