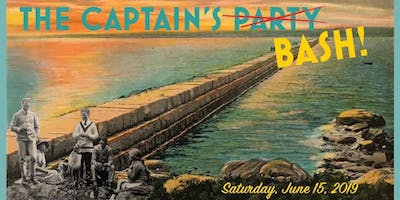 
The 2019 Captain’s Party will bring together more than 300 party-goers for the Museum’s annual fundraising event, set for Saturday, June 15, from 6:00 to 9:00 pm. A time-honored tradition, The Captain’s Party has long been the kick-off to summer on Cape Ann.

In the early twentieth century, Gloucester’s own Leslie Buswell, A. Piatt Andrew, Henry Davis Sleeper, and John Hays Hammond were well-known for their alternating house parties.“On calm evenings in a curious quiz of musical sophistication”*, neighbors would hear their music cast across the water and know a bash was stirring. (The acronym, of course, was inspired by their surnames).

THANK YOU TO OUR SPONSORS

Cover photo: Detail of a historic photograph (Leslie Buswell collection) and postcard from the collection of the Cape Ann Museum Library & Archives.