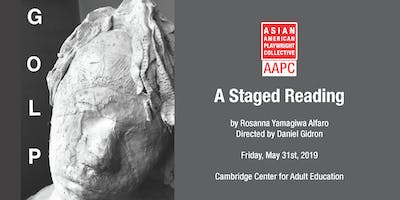 What Does It Mean To Be Human?

A scientist creates Golp, an emotional android, to be a companion for her lonely mother and a playmate for her adopted daughter. At first Golp seems like the perfect tabula rasa for his human family, but he soon develops a mind of his own.

The play was part of Huntington Theater's 2013 Summer Workshop.

This event was made possible from the generous support of The Boston Foundation and the Bob Jolly Trust.

Where is the Cambridge Center for Adult Education?

The event is at Cambridge Adult Education's 2nd location: 56 Brattle Street.(next to Burdick's Chocolates). Walk up the path to Speigle Auditorium.

How Can I Get There?

By Public Transportation: The Cambridge Center for Adult Education is a five minute walk from the Harvard Square T Station on the Red Line.

By Car: Metered parking (and Cambridge Resident Permit Parking) on Brattle Street and side streets. Please be advised parking and traffic can be a challenge on a Friday evening.

The Asian American Playwright Collective is comprised of Boston based playwrights, who have banded together to raise awareness of the breath and depth of new work that is informed by a complex and multi-layered identity. https://aapcboston.wixsite.com/mysite#!