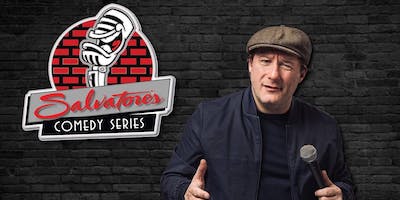 
CPFProductions is psyched to team up with Salvatore's Lawrence at Riverwalk to introduce the Salvatore's Comedy Series to the Merrimack Valley.  Bringing you the biggest and best names in comedy, both locally and nationally!

Join us Friday May 31st with the hilarious DAVE RUSSO and Friends (the hilarious Allie Genereux, Don Zollo and Mac Livingston)!

Dave Russo was a finalist on E! Entertainment Television’s reality show The Entertainer with Wayne Newton and went on to work with Wayne in Vegas for a few years. He was the first winner of the Boston Comedy Festival and was featured on Denis Leary’s Comics Come Home annual show at the TD Garden. Dave is a host on NESN’s Dirty Water TV and has also appeared on NESN’s Comedy All Stars and on the award winning show, Charlie Moore Outdoors with the Mad Fisherman. Dave headlines all over New England and does countless fundraisers and corporate events all over the country.

There are two ticket options available for purchase:

Show Only and Dinner & Show.

Show Only: 9:00 PM – Doors open at 8:00 pm. Tickets are for show admittance only. Cash bar & cocktail service available during show. If you plan to dine in the restaurant prior to the show, reservations are highly recommend and can be made by calling Salvatore’s Restaurant at 978-291-0220 ext. 1. Food will NOT be available in the room during the show.

Brought to you by CPFProductions