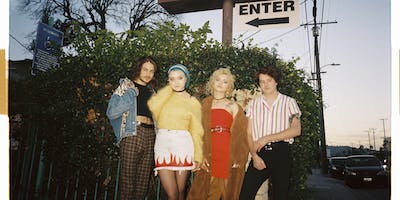 This show is All Ages

Since first breaking onto the alt-pop scene in 2015, L.A.-based band Hey Violet have revealed a rare power to transform everyday moments into something epic and wild and larger-than-life. On their latest batch of songs, frontwoman Rena Lovelis, her sister Nia Lovelis (on drums), and Casey Moreta (guitar) add new depth to the irresistibly shiny sound shown on their full-length debut From the Outside—a 2017 release including “Guys My Age,” a critically acclaimed track that’s now amassed over 230 million global streams. Those songs include their recent single “Better By Myself,” an intricately layered breakup anthem that backs its bouncy groove with lyrics capturing the complexity of self-care in relationships. With its undeniably dance-ready sonic palette, Hey Violet’s new material also delivers more of the sugary hooks featured on From the Outside, whose widespread praise comes from outlets like Billboard, Nylon, Stereogum, V Magazine and The New York Times (with the latter dubbing it “one of this year’s best and most provocative pop albums”). Along with “Guys My Age” (named one of the Best Songs of 2016 by the New York Times), From the Outside offers such hits as “Break My Heart” and “Hoodie,” now approaching 200 million streams. In addition to earning a nomination for Best Underground Alternative Band at the 2017 iHeartRadio Music Awards, Hey Violet followed up From the Outside with sold out headline tours of North America and Europe, thrilling their deeply devoted fanbase with their unforgettable and high-energy live set. With more new music due out via Hi Or Hey/Capitol Records this spring, Hey Violet are now gearing up for their first tour since 2017.