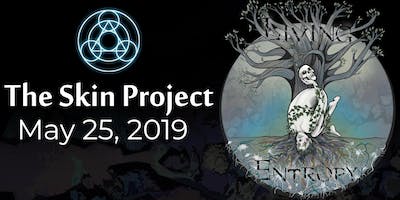 The Skin Project, created in 2015 by Orbán Isma, is a collective of suspension practitioners, artists, and makers of all kinds focused on creating immersive experiences exploring geometric rope sculptures and human body suspension enabling our ability to collectively explore the multitude of complex abstractions in our lives. In the 5th annual installation, curated and originated by Jessica Irvin of Wolf & Sheep Productions, Living Entropy examines the obfuscation of gender and the liminal space of self and interconnectedness via a progression of suspended poses, the deconstruction of Voice, Vibration, Sound, and Ritual Performance to offer collective healing from trauma.

Wolf & Sheep Productions curator, Jessica Irvin, presents the program for the 5th annual installation of renowned body-art spectacle The Skin Project; entitled Living Entropy, the event will take place May 25, 8-11PM for the first time in Oakland. A journey of the flesh, this year’s exhibition brings suspension practitioners, piercing enthusiasts, and alternative artists from across the globe to celebrate the athletic potential of the human body within the context of an immersive gallery setting. Flanked by performances featuring  live cello-looping (Cellista), operatic performance art (Operafication), and physical theatre (Haus Serpens) the mediums of body/soul merge to create a multi-sensory transcendent experience. The intersection between suspension, art, and ceremony spans history. Across the globe, humans have utilized anatomical practices as a conduit for reparative and revelatory experience. Such efforts to transcend the corporeal have been utilized as spiritual offerings, as a means of communication with the intangible, and, more recently, as a means toward reclamation and self-integration in an age of disconnection.

The act of creating constellations in the sky with pierced bodies is a tradition that has been used with reverence, in ritual, and as a rite of passage amongst communities near and far. Living Entropy aims to challenge both viewer and participant to confront their own temporal nature, releasing preconceived notions about our collective limitations and weaving a narrative that exposes the incredible breadth of human possibility. Through the thematic presentation of a site-specific installation, live music, dance, and art, patrons are encouraged to exist and grow, if only for a moment, within states of liminality. Living Entropy seeks to explore/expose the map of trauma and experience woven within the physical body. Reciprocally, patrons can weave themselves amongst the physical map of the varied experiences the suspended bodies are emulating.

Living Entropy showcases a new multi-media structure designed by Jessica Irvin, Johsua Letton, and Nathan Doe connecting eight steel frames to support a dynamic geometric rope vortex, spotlighting a floating chorus of eight models in a progression of poses amidst a deconstruction of sound throughout the installation. The presentation speaks to an aesthetic of intricate connectivity maintained through voice, vibration, natural elements, and balanced steel, all working in reverent coherence to convey the human experience. Living Entropy draws its patrons to examine the concepts of support, connection, survival, and healing in abstract ways, whilst interacting with the ritualized physicality of the human ordeal. The ritual performance pursues understanding and collective healing through the deconstruction of sound alongside the tension of contracting/expanding our largest organ in a gender-neutral space.

We all feel pain, we all bleed, and we all endure. Our collective sense of survival holds us up emotionally as steel structures, rope, and skin connect us physically. Art is for every body, and Living Entropy proves this magnanimously, bringing the audience into the center of the show. Onlookers are invited to step inside the living sculptures, some even reverberating with music when touched, in grand acts of exploration and play.

Living Entropy is produced and curated by The Skin Project, Wolf & Sheep Productions, and Haus Serpens, with sponsorship by PS Hooks; That’s the Point, LLC; Golden Eagle Body Piercing; Hooked Human Suspensions; and CoRE - Constructs of Ritual Evolution.  It is the curator’s great hope that this event will introduce audiences to an array of sensibilities, cultures, and aesthetics, keeping the ever-changing Bay Area alive with meaningful, authentic artistic experiences.

Cellista is an American cellist and performance artist known for her collaborations with artists across various media, as well self-producing stage poems (live performances staged in unconventional spaces that incorporate elements of classical music, theater, improvisation and visual art across a range of genres. These performances often feature a carbon fiber cello and loop station.

She is currently working on Transfigurations, a political stage poem that includes a full-length album and an accompanying book. The album features original compositions that utilize sound collages, noise, thrash metal, and minimalist hip hop. Transfigurations will be released on May 31st, 2019 at Anno Domini gallery in downtown San Jose, CA. The release will be followed by a national tour. For more information please visit Cellista at: Cellista.net

Operafication, founded by Hilary Whitmore, is a Portland, OR based performance art group specializing in flesh hook suspension. Hilary, a Portland native, is a trained opera singer, actress, and ritualist; building shows that combine operatic vocals, new compositions, live instrumentation, movement, fire, and elaborate costuming with the art of flesh hook suspension. Each show is built around a specific intention or storyline, drawing the audience into a new an exciting world each time.

Started in 2003, Operafication has created unique shows in countries, and cities, spanning four continents. From large performance halls to art museums to secret tunnels under a rail station, Hilary’s stunning vocals and striking visuals have entranced many audiences. Operafication has collaborated with many performers, worldwide, and is thrilled to be working with Cellista to create a captivating soundscape for this year’s Skin Project.

Join us in Oakland on May 25 for a once in a lifetime immersive experience and performance.

About The Skin Project

Each annual installation by The Skin Project knits together and diversifies the communities it intersects as momentum compounds in practice and presentation. The event begins with months of organization and planning, nose-diving into a week’s worth of heavy lifting, fabrication, and rehearsals leading up to the choreographed ascent.

The Skin Project’s debut took place in NYC in 2015, featuring a collaborative body of work exploring different stages of one’s personal growth through life, as interpreted by Orbán Isma, and featured 16 bodies suspended simultaneously. The second iteration showed in Philadelphia the following year, addressing concepts of spatial geometry, mental expansion, and the tactile connectedness between persons through the use of a 24ft. Geodesic sphere, constructed and suspended in its entirety with rope as 3 bodies floated inside. In 2017, The Skin Project returned to New York with "Craft", an intimate and intricate rope art installation which utilized over 9,000 feet of rope rigging and was an aggregate of previous pieces Orbán Isma had created independently. In 2018, at Superchief Gallery NYC, The Skin Project presented “Tethered Hearts,” which explored the intersection of technology and geometry as a representation of our interconnectedness as a species. The primary installation was a geometric video game, developed so that the three participating players (the suspendees) unlocked the game with the output of their heartbeats: the only way to win was for their hearts to beat briefly in unison, creating intensified graphical renderings on the screens. This event also featured five satellite pieces further exploring immersive experience within the realm of body suspension.